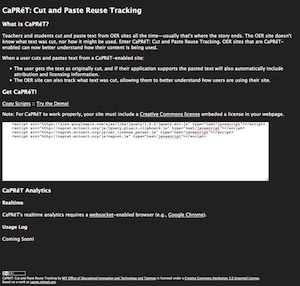 Here’s the “final” report for the CaPRéT work with JISC CETIS funding.

I say “final”, even though we still need to finish off the simple tabular display (and .csv export) for basic analytics.

We showed off CaPRéT at OpenEd 2011 and have been invited by Cable Green at Creative Commons to use the work we’ve done with CaPRéT as the basis for analytics for Creative Commons licenses. Some, pretty heady stuff. We’re still working through this with Cable and Creative Commons, we’ll report back to JISC CETIS and oer-discuss as we make progress. 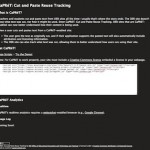 Teachers and students cut and paste text from OER sites all the time–usually that’s where the story ends. The OER site doesn’t know what text was cut, nor how it might be used. Enter CaPRéT–Cut and Paste Reuse Tracking. OER sites that are CaPRéT-enabled can now better understand how their content is being used.

When a user cuts and pastes text from a CaPRéT-enabled site:

How does it work?

CaPRéT uses the jQuery library and a jQuery clipboard extension to monitor the copy event on a given web page. At the time content is copied, the extension adds attribution information that was parsed from the page using a OER license parser (thanks to Pat Locksley’s OpenAttribute for Chrome project). In addition, analytics are gathered at the moment content is copied so that even if the user chooses to remove the attribution information, the server still gathers information that indicates the content was used. If the user pastes the code into another webpage (and does not remove the attribution information) then a small tracking code is included which records views of the copied content. There are also some nifty analytics that display what’s happening in real-time, and basic analytics that displays what’s been cut.

Try it for yourself!

The CaPRéT demo site is at capret.mitoeit.org. And the source code can be downloaded from Github https://github.com/tatemae/capret.

JISC CETIS provided a great opportunity to work on a small project with both immediate and far reaching implications. Some of the impacts are:

Here’s a list of what we’re still actively working on:

Here’s a list of what we hope to do in future work:

This site uses cookies. By continuing to browse the site, you are agreeing to our use of cookies.

We may request cookies to be set on your device. We use cookies to let us know when you visit our websites, how you interact with us, to enrich your user experience, and to customize your relationship with our website.

Click on the different category headings to find out more. You can also change some of your preferences. Note that blocking some types of cookies may impact your experience on our websites and the services we are able to offer.

These cookies are strictly necessary to provide you with services available through our website and to use some of its features.

Because these cookies are strictly necessary to deliver the website, refuseing them will have impact how our site functions. You always can block or delete cookies by changing your browser settings and force blocking all cookies on this website. But this will always prompt you to accept/refuse cookies when revisiting our site.

We fully respect if you want to refuse cookies but to avoid asking you again and again kindly allow us to store a cookie for that. You are free to opt out any time or opt in for other cookies to get a better experience. If you refuse cookies we will remove all set cookies in our domain.

We provide you with a list of stored cookies on your computer in our domain so you can check what we stored. Due to security reasons we are not able to show or modify cookies from other domains. You can check these in your browser security settings.

These cookies collect information that is used either in aggregate form to help us understand how our website is being used or how effective our marketing campaigns are, or to help us customize our website and application for you in order to enhance your experience.

If you do not want that we track your visit to our site you can disable tracking in your browser here:

We also use different external services like Google Webfonts, Google Maps, and external Video providers. Since these providers may collect personal data like your IP address we allow you to block them here. Please be aware that this might heavily reduce the functionality and appearance of our site. Changes will take effect once you reload the page.

The following cookies are also needed - You can choose if you want to allow them: